Built on the impassioned tradition of Basque cycling, Orbea bicycles stand apart. They're technically superior, aesthetically stunning and always imbued with the magic feel that makes them pure joy to ride. In fact, Orbea racers regularly win at the highest levels of the sport. And, we're sure you'll feel like you've won as soon as you start riding yours.

Every Orbea is born in the heart of the Pyrenees in northern Spain. It's a region lush and emerald green with a mild climate ideal for riding year round. And cycling is a

way of life here. Known as Euskadi in the Basque language and Pais Vasco in Spanish, this region is home to some 1,500 cycling clubs and thousands of cyclists. Children actually learn to ride in school and are taught the area's cycling history as they grow up. Even the government promotes cycling passing laws to designate cycling routes where cars must drive very slow and pass with extra care. In short, it's a paradise perfect for designing and making bicycles. 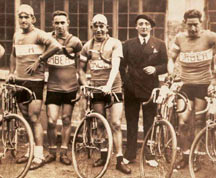 It's no surprise that such a place would give rise to a rich history of bicycle building. The first Orbea was built in 1930. And the brand soon became a staple of local enthusiasts. Over the decades since, Orbea has honed the geometry and quality of their bicycles and they've been the choice of top stars like Pedro Delgado and Iban Mayo, as well as many of northern Spain's 1,500 cycling clubs.

In their over 70 years of bicycle production Orbea has also led the way with cutting-edge innovation. As part of the Mondragon Cooperative, they draw on an industrial/financial team of over 100 companies and 59,000 workers—an unprecedented pool of resources and research resulting in one of the world's most advanced manufacturing facilities.

They've developed one of the world's lightest, strongest monocoque carbon frames, have one of the few factories in the world capable of the strict heat-treating protocol for Starship aluminum tubing, and are the world's largest Columbus tubing customer. Is it any wonder the carbon and aluminum Orbeas ridden by team Euskaltel-Euskadi are routinely among the most admired rides in the pro peloton?

Stop by Adventure Cycling today and talk with John Barvik the owner about his Orbea.  Remember, we ride what we sell, and love what we ride!